Years ago, Vern Anderson sat in the audience at WE Day, an annual youth empowerment event organized by WE Charity, learning about the humanitarian aid the organization provided, primarily in Africa.

“And then I’m thinking like, ‘How the hell can I do something local?’” Anderson recalled his epiphany.

Vern Anderson, a Charleswood resident, collects aluminum cans and cashes them in for money which he donates to Rossbrook House. The 57-year-old has a long track record of community involvement, for which he recently received the Sovereign’s Medal for Volunteers.

Anderson, now 57, took that thought to heart and it led him to Rossbrook House. Every year, the Charleswood resident collects aluminum cans to cash in at the recycling depot and donates the money to the inner-city youth drop-in centre, where he and his wife are Legacy Circle members.

His great-nephew, who lives in Anderson’s hometown of South Indian Lake, Man., helps him collect cans. A couple of years ago, Anderson brought Liam to the recycling depot to watch how the cans are recycled and then to Rossbrook House to learn how the donations benefit the centre.

“So, the kid got to see the whole process of where he’s picking up that can, to the kid playing pool at Rossbrook House, where all this money goes. And for me that’s very important, because if we don’t teach them how to be empathetic, how are they to be understanding?

“We have to work together, and not only work together, but be that person who walks the walk, I guess you could say, because if you want society to change, you have to model it,” he said.

This is just one of the many initiatives with which Anderson is involved. 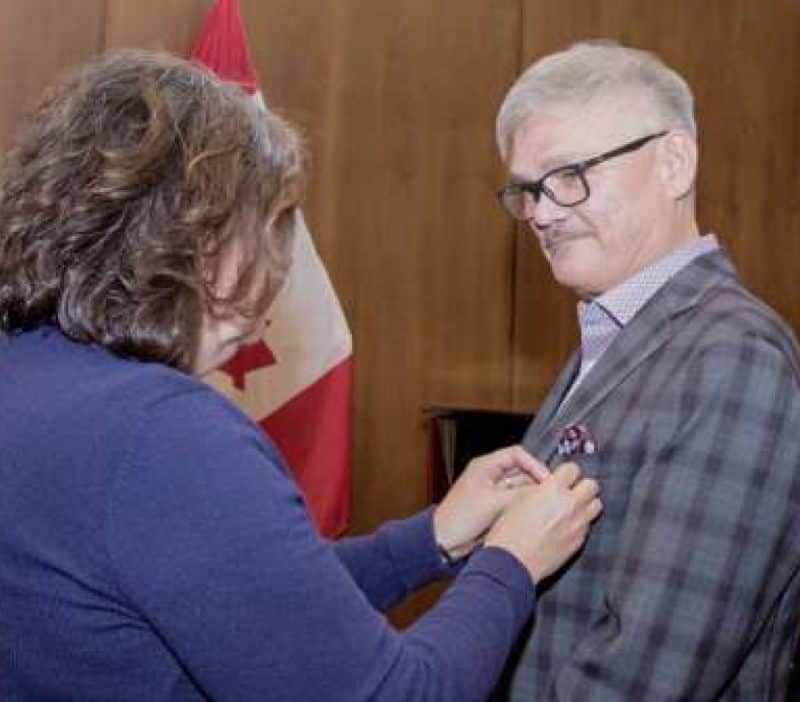 SUPPLIED PHOTO Vern Anderson receives the Sovereign’s Medal for Volunteers at a ceremony on Sept. 21.

For five or six years, Anderson has been fundraising for and organizing an annual Christmas tobogganing party, potluck and fireworks display for residents of his home community.

And as a student advisor for Frontier School Division’s work education program, he initiated and continues to raise funds for the Arnold Dysart Bursary, which is awarded annually to a South Indian Lake graduating student from Frontier Collegiate.

His string of charitable efforts earned him a Sovereign’s Medal for Volunteers, which he was awarded on Sept. 21 alongside nine other Manitobans. The medal is given to Canadians to recognize exceptional volunteer achievements.

“He may have just been awarded the medal last night (Sept. 21) but he earned it years ago,” said Ralph McLean, who is cousins with Anderson and nominated him for the award.

“It gives the citizens of (South Indian Lake) and the kids a hero to look up to; it’s somebody from the community being recognized, really on a national level, for just doing good things. And so hopefully that can inspire other people to do good things as well.”