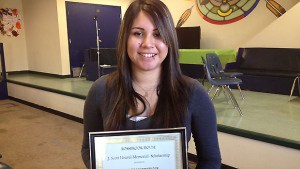 Ainsley Manyshots, 22, was awarded one of twenty scholarships Rossbrook House handed out Thursday. She said the money will help pay her tuition so she can continue to pursue her dream of becoming a nurse.

Twenty students who attend an inner city drop-in centre got a leg up to continue their studies Thursday.

Rossbrook House awarded the students, ranging from Grade 7 to university, with scholarships worth between $1,000 and $2,000 at the drop-in centre’s annual open house.

The funds are to be applied to the students’ tuition or school supplies.

Ainsley Manyshots is pursuing her dream of becoming a nurse and is in her second year of studies at the University of Manitoba, and is one of the recipients.

“When I was younger, I was always in and out of the hospital, and I always admired the nurses and everything they did,” the 22-year-old said.

Manyshots said she has been going to the drop-in’s youth centre since she was a baby.

Recipients had to be enrolled in one of the three schools Rossbrook House sponsors and be a regular user of the drop-in centre or its programs.

Manyshots said she’s grateful for the added help the scholarship will provide.

“I’m glad they’re here to help me, because I try to budget as much as I can,” she said.

Manyshots dropped out of high school to have her first son.

She said now, she’s trying to be a role model for both her children.

“I have two sons, and they are my motivation,” she said. “I have to do something for them, and this is something I have always wanted to do.”

Manyshots said she was also the first of her siblings to graduate from high school and is now the first in university.

She said Rossbrook House is handing out more scholarship awards every year to young people who come through their doors.

“They’re great role models, so (other) kids hear the language of doing something different, of dreaming along those lines,” she said.

Manyshots said she will pass on the support she’s getting now, to her sister.

“I think she is looking up to me,” she said. “She wants to be a nurse too. So I really want to be there for her, to support her.”