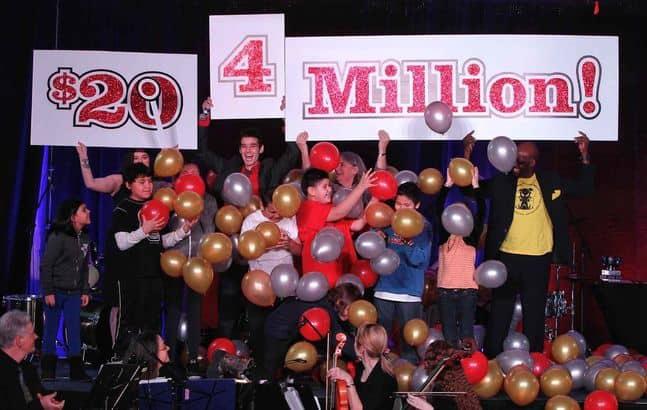 Kids catch balloons as the United Way 2014 Campaign results are revealed at a gala dinner held at the Victoria Inn Thursday night. $20.4 million was raised for the United Way in 2014.

“Tonight’s achievement would not have been possible without the work of thousands of volunteers and the generosity of tens of thousands of Winnipeggers who said yes to their community,” Oakley said in a statement. “Every two minutes, someone in our community accesses a United Way-supported program or service, and every single donation, no matter the size, means lives changed for people and families right here in Winnipeg.”

The news release stated that the money raised in the annual campaign supports a wide “network of programs and services that hundreds of thousands of people rely on each year.”

The United Way of Winnipeg, entering its 50th year, is the only non-governmental organization that provides multi-year core funding for about 100 inter-dependent programs, partnerships and agencies across the city.

“It’s amazing what we can accomplish, for our children and youth, when we work together,” said Champagne, who spoke to the assembled crowd about the power of collaboration and the need to involve youth in the Winnipeg community’s future.

Oakley said there are still some campaigns running and donations that have been pledged that need to be collected.

“We need to focus on that over the next few weeks to ensure everyone who needs support from a United Way program or service can get it,” she said.