CN held the eleventh edition of the CN Canadiens Alumni Challenge charity hockey game on Nov. 7, 2015, at the MTS Iceplex in Winnipeg.

This is the first year the exhibition game pitting CN railroaders against hockey legends was been held outside of Montreal, giving Winnipeggers a chance to see Montreal Canadiens alumni in action. Since 2002, the CN Canadiens Alumni Challenge has raised more than C$2.75 million dollars for charities across North America.

“The CN Employees’ and Pensioners’ Community Fund has raised more than $12.3 million in donations over the past ten years,” said Olivier Chouc, CN Vice-President, Law, and Chairman of the Board of the Community Fund. “This event is our largest fundraising activity of the year and we’re happy we can drop the puck at the MTS Iceplex to support the great work these charities are doing.”

The CN hockey team, made up of employees from across Canada, faced -off against former Montreal Canadiens players including Mike Keane, who played five seasons with the Manitoba Moose. The former Canadiens line up will also feature Steve Shutt, Stéphane Richer and Chris Nilan. That’s Winnipeg’s Ace Burpee wearing number 50 (he just scored a goal!)

Proceeds from this friendly match were donated to local charitable organizations including The Children’s Hospital Foundation of Manitoba, The Dream Factory, Winnipeg Harvest and Rossbrook House. 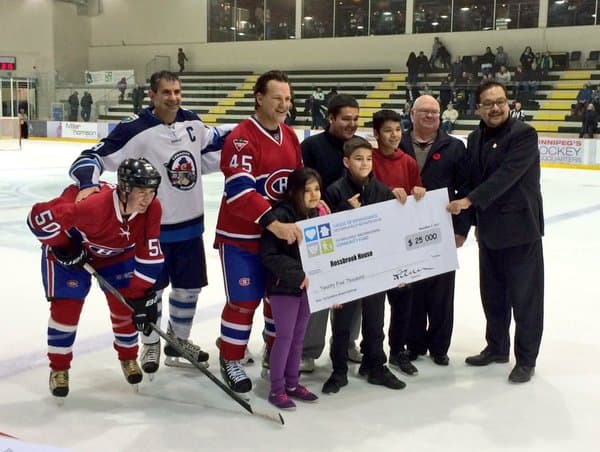